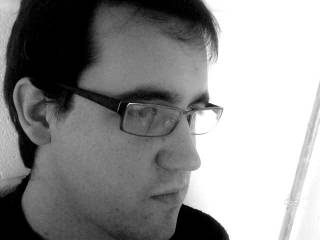 Alex Harker (b. 1983) composes electroacoustic, instrumental and interactive music. His most recent work focuses on strategies for bringing together these sometimes disparate fields to create an engaging and coherent whole. Computer programming for audio applications is a key part of his current compositional activities and he is currently engaged in research at the University of Huddersfield creating tools for the composition and performance of electronic music. From 2011-2012 he was a Research Fellow at University of Huddersfield working exclusively on the HISSTools project. He now holds a part-time lectureship at the University. Software is available via the Software page.

Alex has studied with numerous composers, including Gwyn Pritchard, Vic Hoyland, Jonty Harrison, Eric Oña, David Berezan, Scott Wilson, Roger Marsh and Ambrose Field. Between 2006 and 2010 he was a PhD student at the University of York funded by the Arts and Humanities Research Council.

Between 2003 and 2006 Alex was an active member of BEAST (Birmingham ElectroAcoustic Sound Theatre) as a composer, diffuser and laptop performer. He has also lectured in composition, music technology and sound recording at the University of Birmingham, the University of Hull, North Warwickshire and Hinckley College and the Technology and Innovation Centre. Currently, he performs as a laptopist, guitarist and conductor.